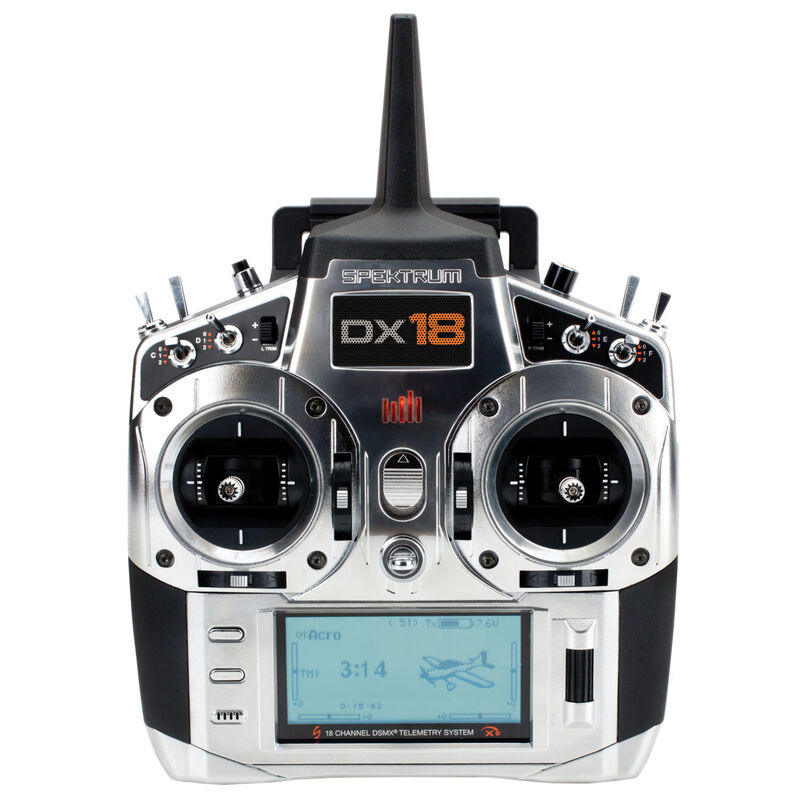 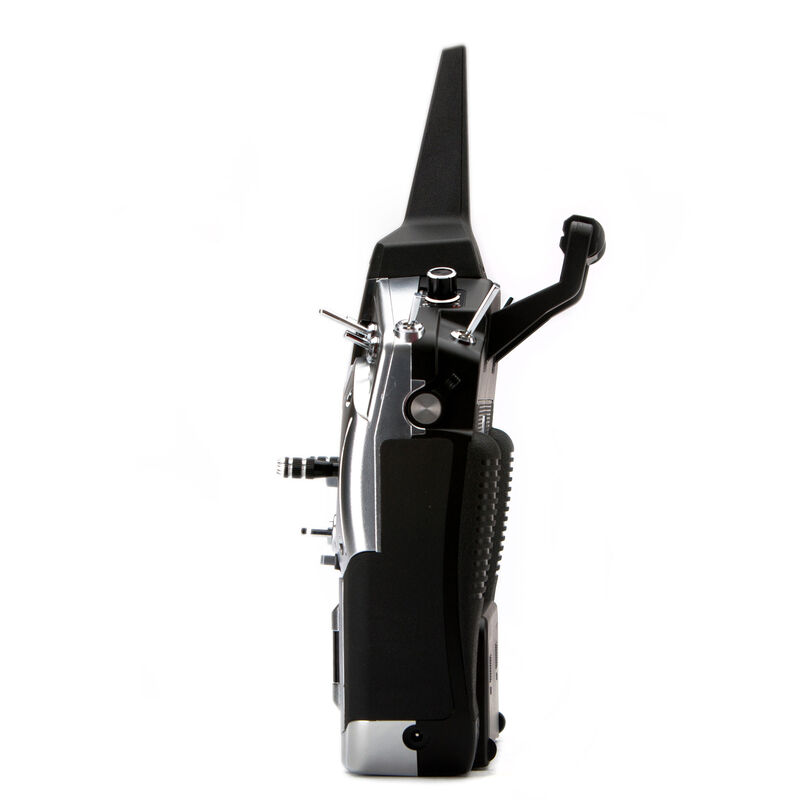 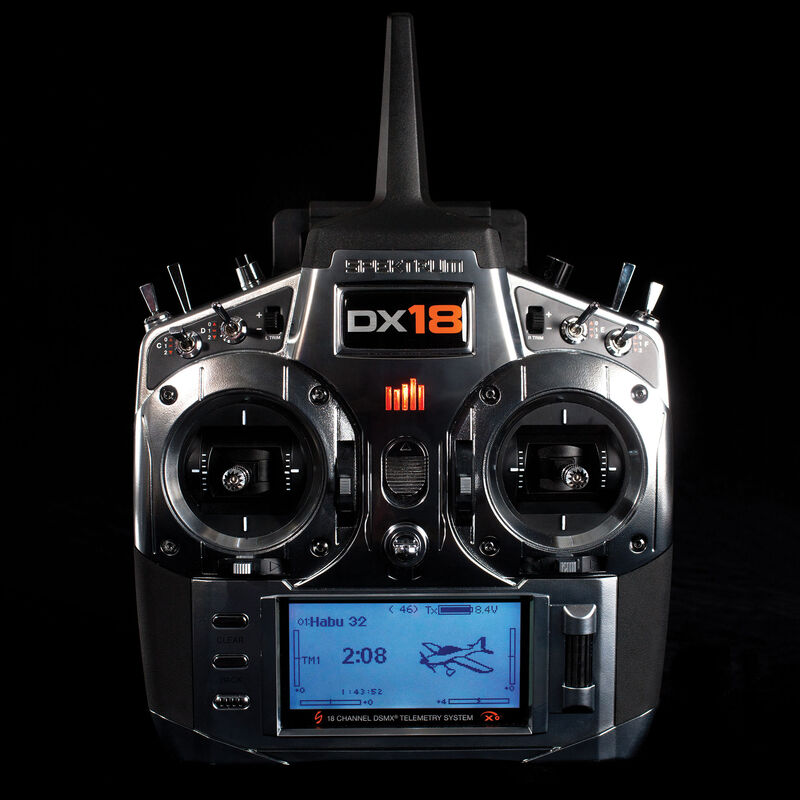 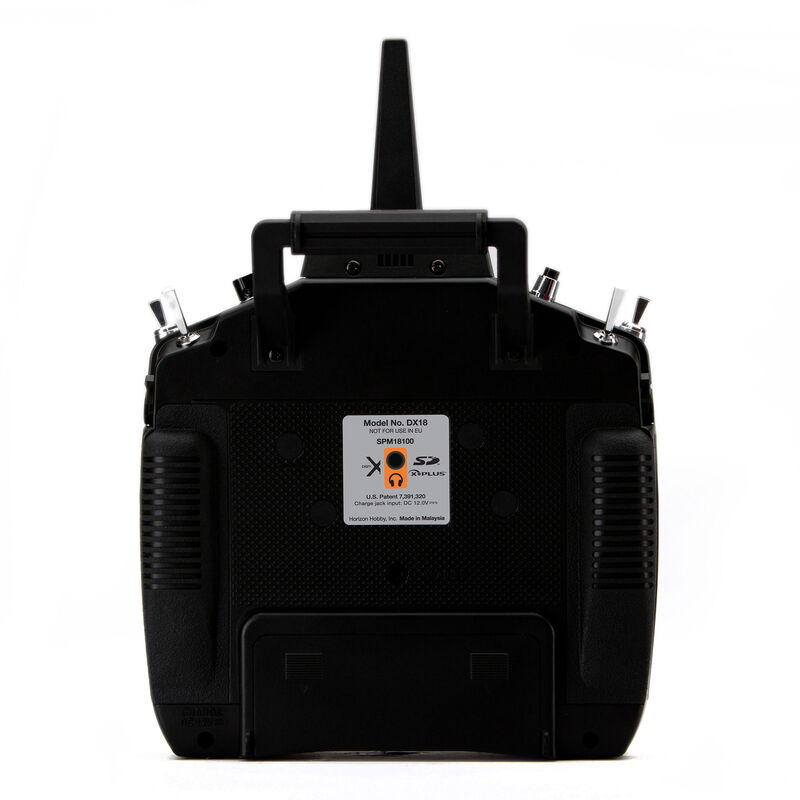 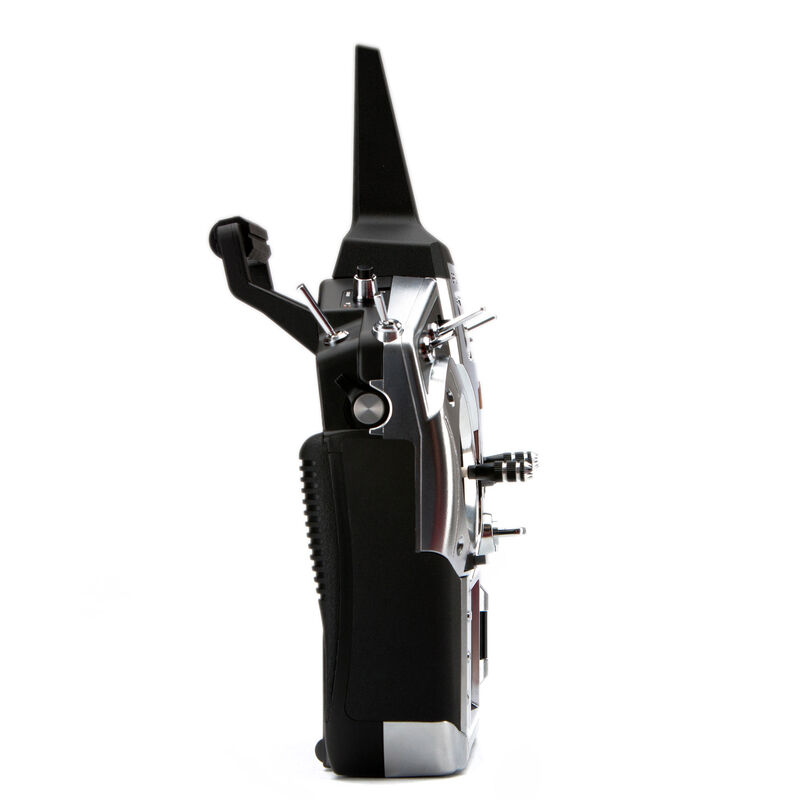 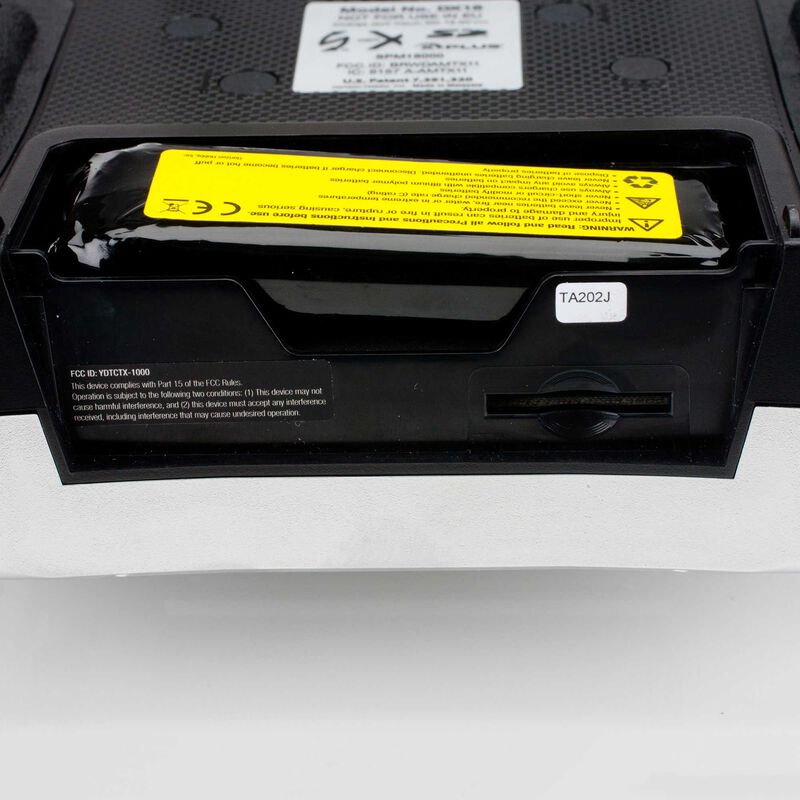 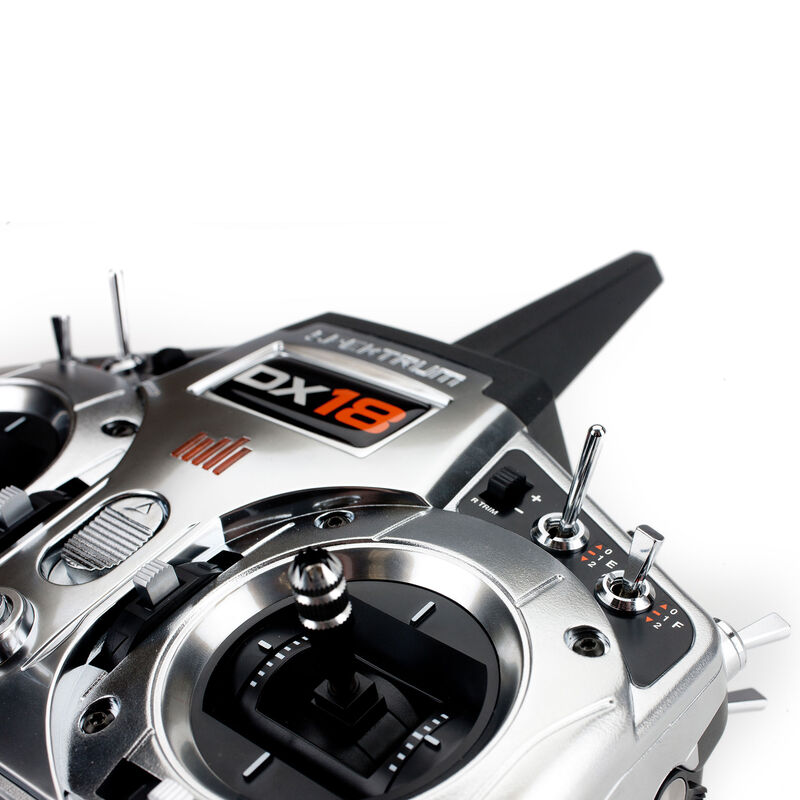 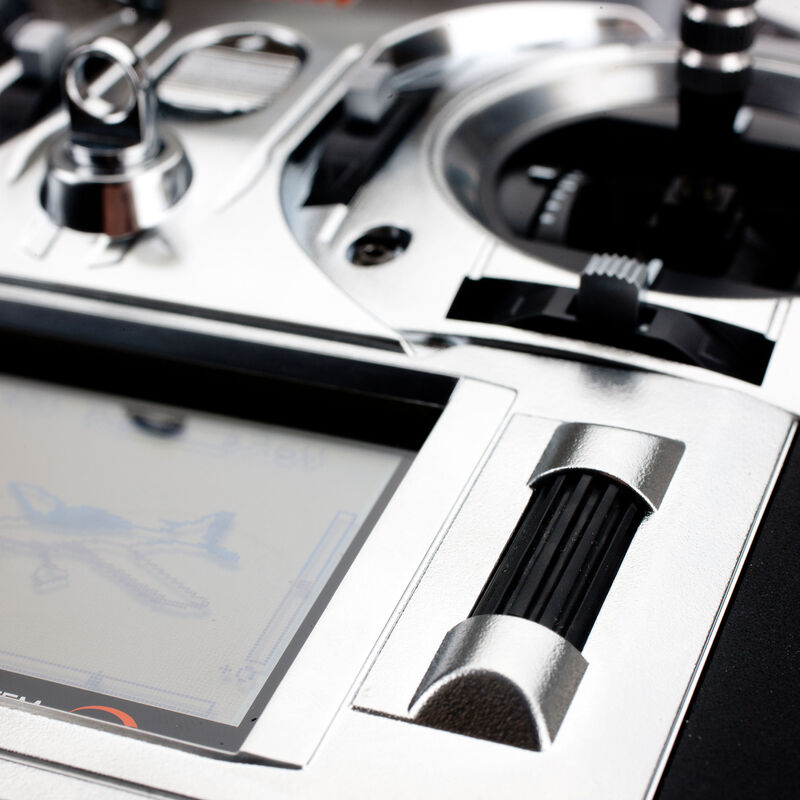 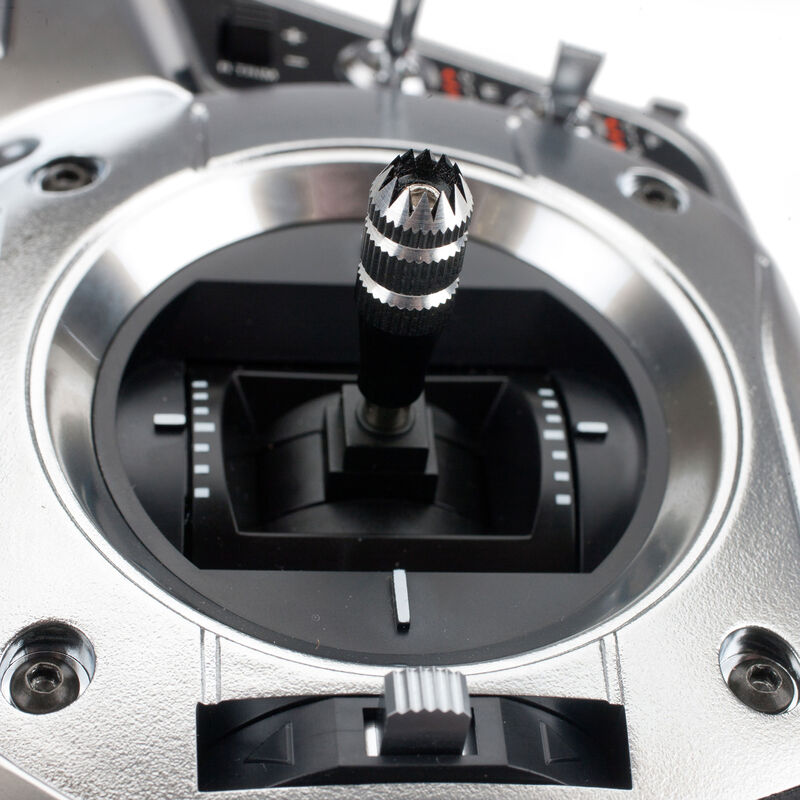 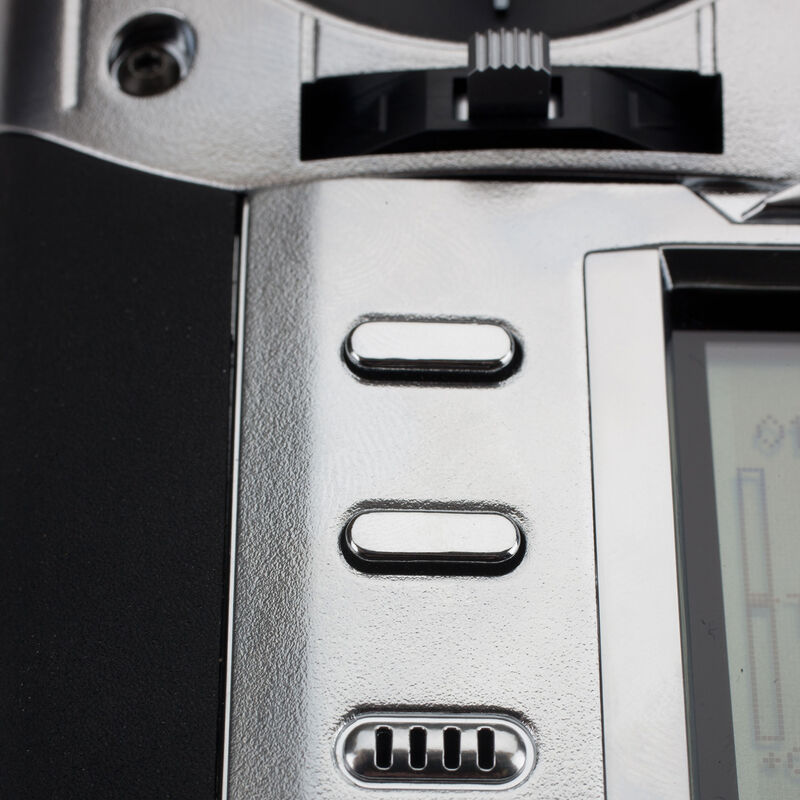 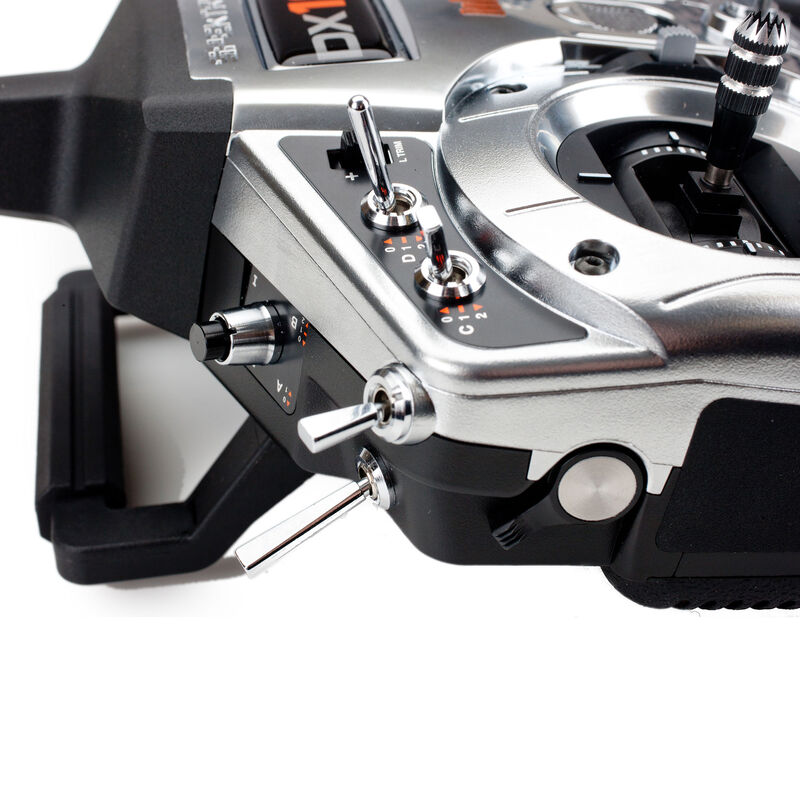 Powerful Features for the Expert Pilot.

The Spektrum™ AirWare™ software that comes in the DX18 offers all the programming features an expert pilot could want. And the intuitive SimpleScroll™ interface makes navigating menus and changing settings as simple as "roll and click." It's almost like using a mouse.

Many Spektrum AirWare features are innovations you won't find anywhere else; innovations that make flying safer and programming easier. 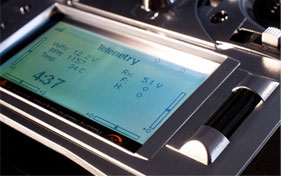 With voice alerts, you can keep tabs on important functions without ever taking your eyes off what you’re flying. They can be programmed to call out what flight mode you’ve chosen or report telemetry information on demand. If an alarm goes off, you won’t have to look at the transmitter display to see what’s happening. The transmitter will tell you.

In addition to extensive airplane and heli programming, the DX18 has the most impressive sailplane programming features you'll find in any handheld transmitter. Ten available flight modes, 5 wing types, 3 tail types, 2 motor types, flap delay with elevator compensation-it has it all. You even have the ability to adjust individual servo characteristics (end points, travel, center, etc.) for all 18 channels.

No more will you need a complicated network of little boxes littering your fuselage if you want to balance servos. You can precisely balance the output of swashplate servos or multiple servos on a single control surface with the transmitter using a 7-point curve mix.

The wireless trainer link gives instructors the option to wirelessly "buddy box" with another DSM2®†/DSMX® transmitter. Once bound to another transmitter, ModelMatch™ technology will allow the DX18 to re-link without having to go through the bind process again.

† DSM2 not available in EU.

Stay up to date

Register your DX18 transmitter and receive alerts whenever a new AirWare version is available.

The enormous capacity of the DX18's on-board memory means you will rarely, if ever, need to juggle models between transmitter memory and your SD card. The model memory menu is easier to navigate too. Only memory slots with model settings saved to them will appear. You won't have to scroll through empty slots or move models around if one is deleted.

Because the DX18 Gen 2 uses the same software platform as the DX6 Gen 2, DX7 Gen 2 and DX9, you can share model setups with owners of those transmitters as well.

The DX18 has all the programming functions you need to fly everything from tiny collective pitch helis to competition sailplanes and giant-scale jets.

Max Out Your Functions.

Built-in telemetry gives you real-time information on things like your model's battery voltage, signal quality, engine or motor temperature, airspeed, altitude and more. You can have the DX18 recite this information on demand using the programmable voice alerts. You also have the option of logging telemetry data to the transmitter’s SD card for review after the flight.

Superior Ergonomics. Made to Fit the Way You Fly.

The weight distribution and ergonomics of the DX18 have been optimized to fit the way you fly. The result is a sense of balance and comfort that perfectly complements the speed and precision of DSMX technology.
Notable features include:

Not yet a Club Member?  Click here to learn more about the RC Club Membership. It's Free!